Last Sunday morning, I was glowing.....drinking my coffee after another great win by South Dakota State the night before. It feels great knowing we are now 4-0 in our conference. 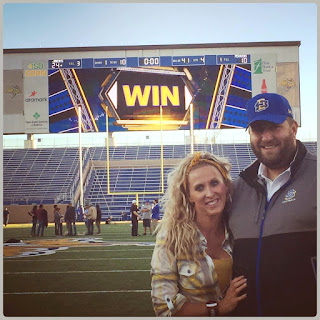 Even though I am happy, I don't forget what it's like to have a season with 2 or 3 wins. It's really tough when Saturday after Saturday you are disappointed for the team having little to show for all their hard work......especially knowing the hours my husband and other coaches put in that whole week. I remember early in my marriage taking those seasons personally. 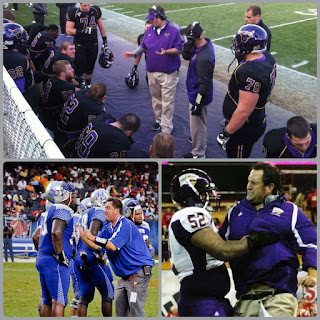 Don't forget that even the best of coaches lose games. Every week....half of the teams in the country lose. Some of the toughest games for me to handle have always been the ones you lose by just a few points....let's face it.....there is no moral victory for keeping it close......You either win or you lose.

So as the season is more than halfway over in college football.......don't forget there are some football families out there worried they might get let go at the end of the season.......Thinking they may have to move again.......Worried about the possibility of having to sell a house.......Wondering where they would be moving to and they how they are going to pay for it......Concerned for their children possibly having to change schools and meet a whole new set of friends. That very football family may know they will be out of a job over the holidays.....and money will be tight. 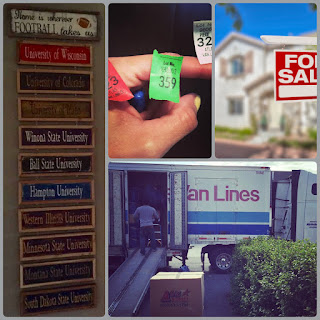 I won't forget because I've been there.....feeling all those things. It's easy for someone having a good season to say everything happens for a reason......because sometimes when there are uncertainties it can be really hard to believe that. I've moved 9 times in 14 years of marriage.....and not all by choice. So I am here to tell you.....everything does happen for a reason. We have had our salary fluctuate up and down, we've bought homes and then been forced to rent, had moves that cost us more money than I'd like to admit, and bounced around in different divisions just to stay in the profession. I don't forget that we have also been blessed with four beautiful boys in four different states we've lived in. I don't forget that after being let go after a head coaching change we went on to places where we had great success......one time even going to a national championship game.

So this post is to all the wives out there who are having one of those tough seasons. I am not going to forget all those wives that messaged me, called, or found some way to let me know they were thinking of me when I was going through those times. I will not forget, and do the same as they did for me. Coaches wives go through a lot and even though we may be having a great seasons.....it's sometimes bittersweet.....because another coaching family we know might very well be looking for a job at the end of this season.

Prayers to all the football families having tough seasons. Don't forget.....