My youngest babe, of my four boys, will be 9 months soon. I had been dealing with months of him sleeping terribly. Nights even waking up hourly......I was seriously starting to feel like a human pacifier 😳🍼🐄🍈🍈.

I read every article I could get my hands on. Plus a bunch of moms, I don't know, wanting me to buy their book for sleeping advice. I tried sound machines, light projectors with floating stars,  an incline, dark room, night light, diffuser with oils, and so on. You name it......I probably tried it. I would've probably jumped through hoops to get that kid to nap. Thankfully a friend of mine (with years of childcare experience and 3 grown babies of her own) gave me advice I needed to here......let him fuss. Thank you Gaye😉❤️.

I was worn out and we were both grouchy. I started with night time. I just let Maverick fuss/cry it out. The first night or two were long, but guess what, he eventually started
sleeping through the night. I turned my baby monitor off......that way I didn't wake up to every little squawk. I also got a rain app on my phone to help.....he's close to our bedroom.....and I wake up to a pin dropping 😳(Yes, I am an EXTREMELY light sleeper, one of the many things that happen when you become a mama).

Nighttime was MUCH easier than figuring out his naps.......LORD HELP ME🙏🏼.........I literally thought I was going to loose my marbles 😜LOL!!!

Let's just say he's a stubborn one.......he must get that from his daddy LOL😉. I decided to log my week of experience for reference to help all you moms who might
be struggling with this and I am here to tell you that you don't need to buy a book to
get it figured out:

Monday: Maverick went down for his morning nap a little after 9:30 after a morning of play, tummy time, and his baby cereal. He nursed and slept for about 25 minutes......let him cry for about an hour (I told you he's stubborn.....typical man LOL.) finally he went back to sleep for only another 20 minutes🙄. I then went to get him because at this point he is getting hungry  for lunch, and needs a diaper change. After lunch I changed him, gave him some play time, read to him, nursed him, and put
him down for round two of nap time. He was wide awake so I decided to use that light show I thought would answer all my napping prayers 🙏🏼. He fell asleep for a good 35 minutes, fussing for about 20 of them, but then going to sleep.

Tuesday: A 35 minute morning nap.....not great. I was forced to get him because my 5 year old son has preschool and I needed to go to the gym. At 12:45 we got home I read him two books, nursed him and laid him down at 1:15. He, of course woke up 30 minutes later crying. I let him cry/fuss for 20 minutes and he went back to sleep......for another 39 minutes......ugggggg. Fussed for only a couple minutes then I watched him in the monitor while his eyes got heavy and fell back to sleep.....omg......making progress🙏🏼

Wednesday: Morning play and breakfast. Put him down at 9:15 for his morning nap.......another 30 minutes minute nap🙄. I let him fuss for a little while to see if he would go back to sleep. Went to get him after 20 minutes to run our errands before lunch. Fed him lunch, read him books, nursed him, and laid him down for his afternoon nap. Pretty much a terrible nap, and even though I let him fuss, I was forced to put him to bed early tonight because he was so overtired and didn't sleep much more than an hour combined.....uggggg.

Thursday:  Morning play, breakfast, and books. Went down around 9:15 and slept for an hour......progress💃🏼?!? Went down for his afternoon a little after 1. Woke up 25 minutes later fussing.......I am not going in there.....he's tired and needs to sleep
more. Not a successful afternoon nap and was forced to put him to bed early again because he was overly tired.

Friday: Our morning routine followed by an amazing morning nap. Went down a little after 9 and slept till almost 11👍🏼. His afternoon nap was the same as Thursday. Less than 30 minutes and crying. Let him fuss again, but never went back to sleep. Fussy again and overly tired.....went to bed early....sigh 😔. Making progress slowly.
Saturday: He got the flu.....nooooooo🤒
Sunday:.....followed by the whole family (except Daddy who was working in another state).......
Monday: ALL our routines out the window......survival mode😫
Wednesday: Our moving truck arrives 🚛📦😳🏃🏼.....did I mention that the routine was literally out the window.

With several nights traveling, and all of us overtired....our baby finally figured out sleep is a good thing as we were getting settled in South Dakota. I think letting Maverick fuss it out helped him learned to self soothe. He still nurses himself to sleep (which many books told me not to do), but that works for us. He officially has a great nap and night routine. He occasionally wakes up fussing, and now I can happily say he puts himself right back to sleep 👶🏼💤 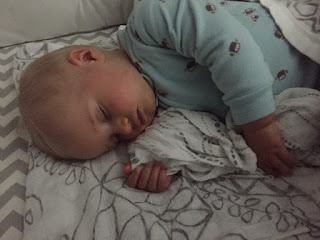 I really wondered through this process why my other three were such great nappers.....I felt like I knew it all. Then Maverick  came and I couldn't figure it out.....why? My 2nd born, Jaxton, had colic and it was basically survival mode everyday. Having a baby with colic and listening to 3 hours straight of crying (from 8-11 at night).......they were going to nap......period. I think with, Maverick,  I just got a little too soft LOL. I went in for every peep and he didn't know how to self soothe. Anytime he fussed in his swing I was right there picking him up.

So to sum it up for all you mamas out there......it's ok to let you babe fuss themselves to sleep. Sleep is important for them to grow, and learn to self soothe.......plus it makes both mama and baby happier. Sometimes that routine has to be put on hold if their sick and really need you, but having a schedule will help you develop a healthy sleep schedule. You'll know what works best for your routine (if that means nursing your babe to sleep-so be it.) You got this mama 👍🏼👶🏼🍼😴. 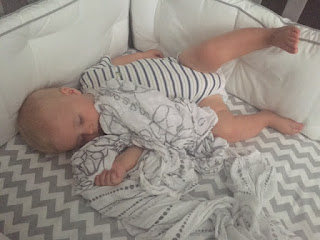