Angel Baby Of Mine

I’ve always loved and adored the thought of a really big family. After I married a guy who wanted a big family himself (he was the oldest of 4 siblings)....it’s probably not surprising that we have 4 children of our own after 16 years of marriage. I joke with my husband that if we won the lottery we would have 8 kids, and I think my husband has secretly worried,  that I’d never really be done wanting more children. Honestly, I’d rather live on ramen noodles, while having more babies to rock and love. In my mind, a home full of love....mixed with a little chaos....is more important than a house furnished with top-of-the-line fixtures and an expensive backsplash in the kitchen. You could say I pick babies over backsplash.

Last October, I found out I was pregnant with a due date of June 20th. As you can imagine I was overjoyed. I surprised my husband on a Thursday night, by putting an actual bun in our oven. We were absolutely thrilled....I was beaming with joy. 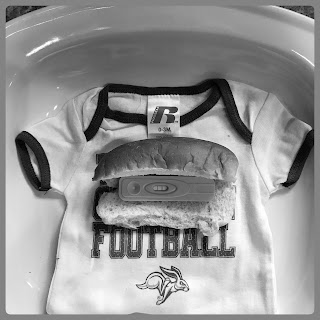 My first doctor’s appointment, at 8 weeks, could not come any sooner. I literally skipped with excitement heading to the clinic. My husband and I were so excited to expand our big family, and we were planning on telling our sons about our newest addition that evening after the doctor’s appointment. I had a t-shirt made for my 3 year old son to announce the big news to his three older brothers. 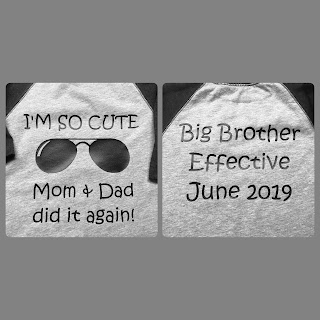 Life, however, throws you curveballs sometimes. At our first doctor’s appointment the doctor performed an ultrasound and was unable to find a heartbeat. Everything else was there....just not the sweet sound of a little tiny heart. I just sat there numb and in disbelief. When my doctor talked about it most likely being a miscarriage, I just stared at her blankly not even able to say a word. As soon as the doctor left the room, I broke out sobbing.

They took some bloodwork after the ultrasound to test my HCG levels....I cried the entire time. My husband was sweet and consoled me, but as any coach’s wife will understand, he had to get back to the office. It was still football season, and we had one of our biggest rivalry games of the year coming up.

After receiving my initial bloodwork and HCG results, I had a ray of hope, as the numbers were positive for where I was supposed to be at in the pregnancy. They needed to take additional bloodwork 48 hours later, which seemed like 48 days, but unfortunately, my HCG levels had dropped by 3,000. This pretty much confirmed I was having what’s called a silent miscarriage. I requested another blood test...I guess deep inside I was hoping and praying for a miracle.
The office called back with more bad news....my levels had again dropped significantly. 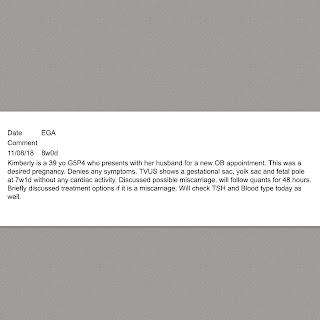 I didn’t realize it was physically possible to cry as much as I did in the week after going through this. I’ve felt a mixture of emotions.....lonely...hurt....angry. All the joy I had felt about our expanding family was robbed from me and left me questioning why this had happened to me. It was hard for me to see other pregnant women. Not that I wasn’t happy for them.....it was a reminder of our loss. When I overheard them complaining about being tired or sick....I was wishing for those kinds of “problems.” When they were proudly showing their round tummies....it was depressing to look at my tummy and imagine how much I should be showing right now. I have always loved ooooing and awwwwing over little babies I run into while running around town, but seeing little ones just left me with more empty feelings inside.

In the weeks after, I tried to avoid seeing anyone I knew......crying for days isn’t a good look. I cried to nurses....I cried over the phone to the doctor......I even cried checking out at the grocery store.

The emotional and physical pain from a miscarriage is one of the hardest things I’ve ever had to go through. Even at just 8 weeks, I felt so attached to that sweet little baby. I would say there is a unique kind of pain that comes from preparing a place in your heart for a baby that will never come. 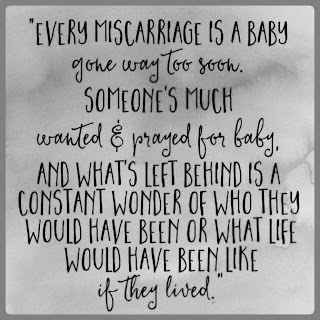 There has been a way for me to find some kind of peace after so many tears and sleepless nights. A funeral home in our town offers complimentary cremation services to families who lose their baby to miscarriage. I was able to have our sweet baby cremated, with the baby’s ashes placed in a heart shaped pendant. I chose a heart pendant because that little baby deserved a beating heart, and by wearing it on a necklace my baby will always be with me, close to my heart. 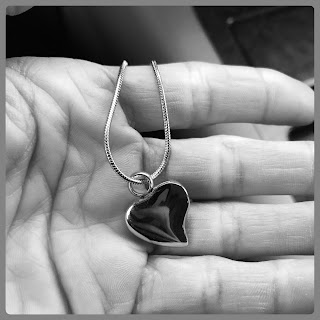 It is interesting how society thinks miscarriage is uncommon, yet, 1 in 5 pregnancies end up in a miscarriage. Talking about miscarriages in our society remains taboo.....a private subject even though it is such a shared experience. Feeling alone is very common after suffering a miscarriage. Open conversations about your loss can aid the healing process.

As hard as this has been for me to write about....I wanted to share my story for all the women out there who have lost their babies through miscarriages. I want you to know you are not alone. My mom told me something as I went through this that comforted me quite a bit: that unborn babies have a special place in Heaven. I will hold our baby in my heart until I get to hold that little baby in my arms in Heaven.

To those who have suffered from a miscarriage, know that I will be praying for you, as well as those of you still waiting for your rainbow baby. 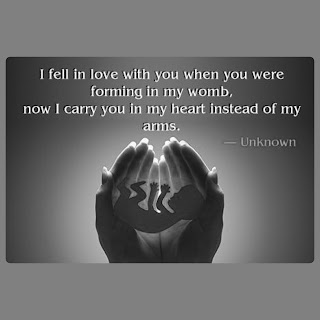